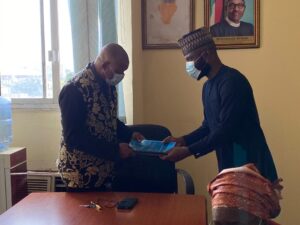 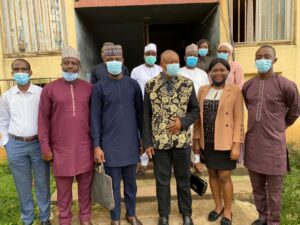 “the Board welcomes you (Tap Nitiative) to carry out research on the 62 facilitates that were given funds within the FCT. We will support you, we will partner with you because we strongly believe in accountability, transparency and good governance” – Dr. Ndaeyo Iwot

On the 15th of October 2020, Tap Nitiative and Dataphyte held a meeting with FCT Primary Healthcare Board Members and other stakeholders of Primary Healthcare Institutions at 12: 30pm at their Conference room. The aim of the meeting was to present the findings from our Corruption Victimization Survey which was done in partnership with Dataphyte. The Survey was carried out in Primary Healthcare centres across the six Area Councils in FCT.

Mr Mbasekei Martin Obono, Executive Director of Tap Nitiative, explained that the purpose of the research was not to undermine or discredit the work of the primary health care but to provide a vivid representation of what goes on at primary health care facilities which the board might not be aware of. He further stated that the research was carried out to correct any assumptions on corrupt practices and the cause of corruption in Primary healthcare facilities across Abuja, pointing out that the survey would make it easier for the Government and civil society organizations to partner with relevant government agencies  to prevent corrupt practices in the healthcare sector.

Mr Joshua Olufemi, Executive Director of Dataphyte, gave a data visualization presentation of the survey to the board, he broke down the methodologies and strategies which were implemented in carrying out the survey. He explained a few of our findings which includes the survey of 449 recorded medical transactions with only 83 people out of the 449 reporting that they were issued receipts for services that were paid for while the remaining 366 people didn’t get a receipt for their transactions, 115 patients were said to have paid between 300-37000 Naira for hospital bed space. Similarly, patients were found to have paid for treatments which were supposed to have been offered for free in these facilities.

The Executive Secretary, FCT Primary Healthcare board,  Ndaeyo Iwot,  gave a brief summary of the functions of the Board and its operations. He expressed his appreciation and respect to the organisations that carried out the survey. He revealed that the FCT has received its basic healthcare provision fund which is a 1% of total funds kept aside for basic healthcare in the 62 facilities within the FCT.  He stated that, “a great window of opportunity has opened up between the board and  Tap Nitiative since the organization is interested in fieldwork, accountability and transparency.” He went further to say that, “the Board welcomes you (Tap Nitiative) to carry out research on the 62 facilitates that were given funds within the FCT. We will support you, we will partner with you because we strongly believe in accountability, transparency and good governance” He further stated that the Partnership would enable Tap Nitiative to further understand the systems of the primary health care board and apply personnel and appropriate methodology in the research. The Executive Secretary also said that he was optimistic that the meeting is a start of something new between the Board and Tap Nitiative.

In his closing remarks, Mr. Obono thanked the Board and all stakeholders present and accepted the partnership opportunities.

The Meeting ended with group pictures and presentation of the report.